Koalect, partner of the FAB, is a Belgian enterprise that offers fundraising, crowdfunding and crowdsourcing tools. They are increasingly focusing on integrated forms of fundraising in which traditional and new digital channels complement each other. An advice they give to all clients: invest in qualitative relationships and interaction with (potential) donors. 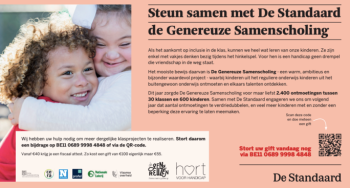 Daan Krauss, marketing & operations manager at Koalect, explains the increased focus on integrated forms of fundraising: “Many organisations for example already work with QR codes to collect donations, but they do not obtain the right data to issue tax certificates. We worked on a way to develop QR codes in which there is data collection, and that these QR codes can also be scanned with all bank apps. We already did some campaigns, including one with Hart voor Handicap, which had an advertisement with QR code in the Belgian newspaper De Standaard.”

Professional management of data is something many organisations are now focusing on. “In the past year, we have built many bridges between our Koalect tools and the various CRM systems within the organisations. We have a lot of expertise on the different systems in the market and are happy to assist organisations in making the right choices. Today, we already have active connections with Salesforce, King Boudewijn Foundation / Iraiser CRM, Microsoft Dynamics, Eudonet, and Donea.”

Koalect works for a great variety of organisations (in non-profit, foundations, …). “We are working for some 165 organisations. Since the corona outbreak we have seen a steep rise of clients in the health sector, education and especially in the cultural sector. The latter sector was hit hard during the pandemic and also saw its public resources reduced in recent years”, Daan says. “Many cultural organisations are looking for alternative ways to finance their operations. That’s why we also established a collaboration with Cultuurloket.”

Many of Koalect’s clients were forced to be creative and innovative in their fundraising campaigns when the coronapandemic hit. Daan: “Many campaigns that were exclusively offline before corona now had to be rolled out in a digital format. This made a lot of organisations adopt a digital mindset when developing campaigns, and this digital mindset continues to exist even as the measures disappear. We saw a lot of campaigns that cleverly combined digital and non-digital elements. For example, large fundraising events were split up into a strongly organised central event and a decentralised part, where participants were free to participate in the concept without being present at the central event. For example, participants of the Refugeewalk '21 could travel to the central event, but could just as easily participate on their own in their hometown. In this way, you increase the scalability of your concept and limit logistical headaches.”

Koalect found that for many clients 2020 was a better year than 2021. In quarter 4 of 2020 clients/ organisations had an average increase of 214% compared to quarter 4 in 2019.  Daan: “We believe, in 2020 the increased tax deduction of 60% instead of 45% played a major role. Furthermore, in 2021 we noticed a form of corona fatigue (we see this in classic campaigns of larger organisations) and a worsened economic situation and uncertainty due to inflation, energy prices, etc.”

Still Koalect is optimistic about the giving behaviour of people. "Since the start of Koalect in 2014 average fundraising incomes per organisation have kept growing due to digitisation and new developments we did over the years. In 2021 we saw an average decrease (about 15%) for the first time which can be attributed to many factors (lower deductibility, macro-economic uncertainty, Corona fatigue, etc). However we can't forget that 2020 was also an exceptional year with very high growth in digital fundraising, so we expect the "normalised" figures of 2021 to translate in growth again for 2022."

“Organisations that use the right channels to reach various target groups with a tailored story will have a head start.”

“However it is clear that people continue to give, but the way they do so is changing. We are not only talking about the channels people use to donate, but also the way donors choose a charity. Integrated fundraising where offline and digital fundraising channels intertwine is becoming the norm. Today, we already see the frequent use of QR codes in direct mailing or street fundraising. Organisations that succeed in using the right channels to reach their various target groups with a tailored story will have a head start.”

“Donors are becoming more picky and demanding. They are increasingly in need of concrete projects, rather than general structural support of organisations for the sake of their brand name. This requires an adapted approach and the necessary tools, but is also an opportunity for organisations to get involved in a stronger relationship. A point of attention related to this evolution is that the more organisations communicate concrete projects, the less donors understand that there is also an overhead structure with costs, marketing costs, fundraising costs, etcetera.”

Koalect is proud to be helping over 165 organisations transform their relationship with the general public (using digital technology), regardless of specific campaigns.

Some campaigns they are specifically proud of:

Some advice for digital fundraising and crowdfunding

“Fundraising is the result of a qualitative relationship or interaction. This relationship is therefore reciprocal and must be nurtured with valuable interactions. Organisations often think that donations will come in after one email with a Call-to-action to donate. Invest in these relationships and you will see the results in the long run”, Daan adds.

Previous post Blik op onderzoeksresultaten studie over fondsenwerving in België - interview HOGENT met FAB Next post No matter what organisation you work for as fundraiser, it is always all about the people
Close