“At Bozar we now talk about a phygital environment, where you consider the digital to be complementary to a live performance.”

“At Bozar we now talk about a phygital environment, where you consider the digital to be complementary to a live performance.”

Elke Kristoffersen is responsible for the department partnerships and philantropy at Bozar, the venue for our Santé Généreuse, the member event of FAB and testament.be in June. She told us about how Bozar and specifically her department coped with the disasters of the restrictions that came with the pandemic and the consequences of the fire in Bozar in January 2021. 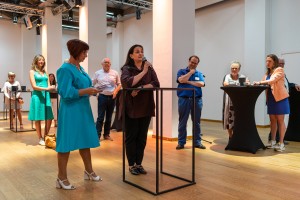 Elke: “My team and I are responsible for partnerships and philantropy at Bozar. This year is Bozar's 100th anniversary: one hundred years ago the statutes were laid down at the town hall for the dream that was born in 1922. From the start the private sector has been important for Bozar. And it still is. In Bozar's financing model more than half of the income has to come from the private sector. Our department has three activities. We work with companies, but also with private donors and, last but not least, with the philanthropic sector for our social projects, for which we work a lot with foundations.”

“The pandemic put all our activities to a halt, not only at the bozar. All sectors were affected, but certainly the cultural sector. For our sector, no visitors or activities means no income. Fortunately, we responded very quickly with a digital alternative. A number of colleagues did the same. Digital will never be able to replace live events, of course, but it has brought a bit of culture into many people's homes during that period of isolation. They were able to see an exhibition or attend a concert online.”

“At Bozar, we went through a digital transformation. We now talk about a phygital environment, where you consider the digital to be complementary to a live performance. That is the future. The question is how to get your audience excited about it. The digital offer is gigantic today, even in our sector. So that is a serious challenge.”

To maintain good relationships with their patrons and partners, Bozar organised some outdoor events for them during the pandemic (with social distance). “And when there were certain concerts in Bozar to be streamed without audience, we invited a select group of patrons to come and join live. These are really meaningful relationships and partnerships, so we really did not want to neglect them.”

At the beginning of 2021, another disaster hit Bozar: the roof caught fire. “The damage was enormous, especially the water damage. Bozar is situated on a hill, the fire took place on the side of ‘Het Paleizenplein’ and the water found its way. So the concert hall suffered enormous damage, especially the organ. Again, we reacted quick by starting a crowdfunding campaign, in collaboration with Koalect. We were lucky to see a wave of solidarity from people who cared about Bozar. It was our first experience with crowdfunding at Bozar and it was a real success. Now we have the challenge of following up on all the donor data we got out of this campaign. We currently do not have the resources to do that, so we have work ahead of us.”

Yes, that's right. In Bozar’s financing model, more than half of the income has to come from the private sector. So yes, fast results. But with donations and legacies, you need resources for that, someone who develops and follows up well. Unfortunately, that is not one of the priorities at the moment...